Clearly, Penn State University’s Professor Michael Mann has no sense of humor, nor does he have a sense of irony.

Honestly, Michael Mann sounded more like a member of the UN-American Activity Committee than an academic and scientist advocating “discovery, debate, and discussion.” Steve

Speaking to a full crowd at the Law School’s Honigman Auditorium, the Distinguished Professor of Atmospheric Science at Penn State University and director of its Earth System Science Center, said those on the front lines of the climate change debate “were dealing with fake news and alternative facts before they were in fashion.”

Throughout his lecture, Mann dissected the ways in which climate change is often portrayed as a debatable phenomenon.

For instance, when climate change is a news show topic, producers will host a scientist alongside a “climate change contrarian,” even though a vast majority of scientists agree climate change “is real, it’s human-caused, it’s already a problem,” he said. 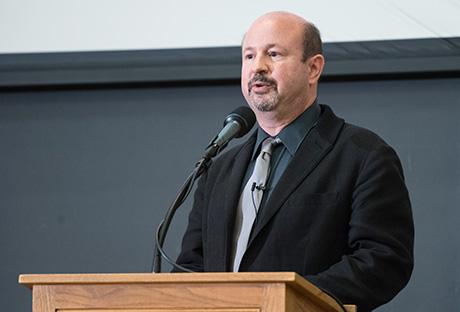 One of Mann’s pet peeves is the way the connection between climate change and extreme weather events is discussed.

He was speaking at the 27th annual lecture that honors three former U-M faculty members — Chandler Davis, Clement Markert and Mark Nickerson — who invoked their constitutional rights when called to testify before a panel of the House Un-American Activities Committee in 1954. All three were suspended from U-M. Markert subsequently was reinstated, and Davis and Nickerson were dismissed.

In introducing Mann, President Mark Schlissel said he hopes U-M will always be “an unalienable forum for discovery, debate and discussion — a place where respect and disagreement are complementary, where each makes the other stronger and where we all advocate for and learn from their confluence.” 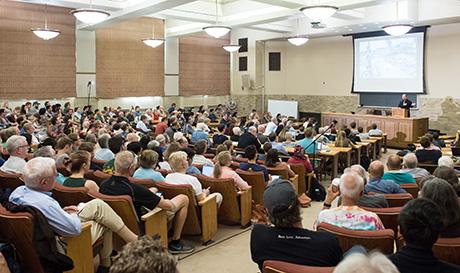 In his lecture, Mann said the last two years have been the warmest globally when one considers global sea surface temperatures, and that the warmer waters contribute to more intense hurricanes. He disagreed with the notion that it’s a coincidence the planet’s waters have become warmer at the same time we’ve witnessed some of the worst natural disasters on record.

Mann argued fossil fuel interests have “cultivated” climate change denial and spent millions of dollars in a “massive misinformation campaign” intended to confuse both the public and policymakers about climate science. He said this campaign has tried to discredit the science and the scientists behind it — himself included.

He said denial has several stages, including claiming it does not exist, that it’s natural or self-correcting, or that it’s possibly “a good thing.”

He outlined how data and research can debunk these types of claims when applied to climate change.

“If you look objectively at the impacts of climate change on food, on water, on human health, on our economy, on national security — across the board, climate change is already doing great damage,” Mann said. “And if we continue on this road, we will see truly catastrophic and irreversible impacts.”

The path forward, Mann said, is to solve the problem at its source — to find solutions to the ongoing accumulation of carbon in the atmosphere.

He said the new administration presents a setback in the fight against climate change, but while President Donald Trump has threatened to back out of the Paris climate accord and eliminate other pro-environmental measures, state and local governments can potentially help the nation live up to its promises in the Paris agreement.

He said people also have to make sure their voices are heard on the issue.

“The decisions we make and the actions we take in the years ahead are going to determine what sort of planet we leave behind for our children, grandchildren,” Mann said.