Not much has changed since Dr. Rusty Riese’s May 2014 Presentation in front of Houston Geological Society. The alarmists like Dr. Michael Mann are using the same old arguments, but after 3 more years, they seem even less fact-based. Frankly, I would love to have Dr. Mann do a 45 minute presentation about the facts and fictions of climate change October 2017. At least, I would hope that I would understand his scientific arguments better. Steve

Dr. Rusty Riese’s May 2014 presentation to the Houston Geological Society…

The past several years have seen several opinion pieces regarding climate change appear in the pages of many publications, both scientific and secular.  Although both sides of this now almost religious debate were represented, few if any real facts or data are provided to support the opinions expressed.  The  public deserves more, and specifically deserves to be properly informed. 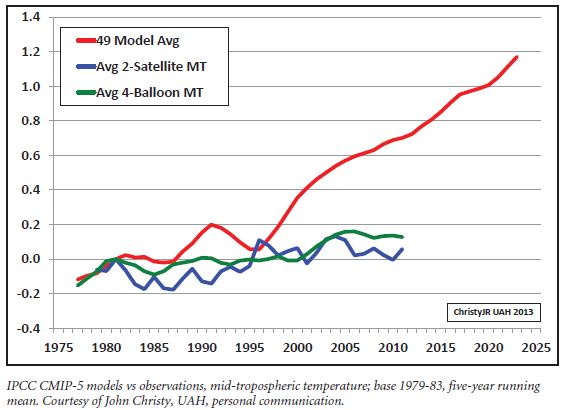 The heat content of the atmosphere has remained largely unchanged since 1995.   Data prepared and compiled by a number of climate scientists illustrate the wide divergence of climate model projections from what has been occurring: the climate has not been warming any more than would be expected as the world continues to move out of the Little Ice Age.  These data have been accepted by the IPCC, whose chair admits that the climate modeling community does not understand what is happening.

Water vapor in the atmosphere is a more potent greenhouse gas than CO2.  Climatologists have understood this for decades and this is a fact clearly expressed in all climatology textbooks.  None of the climate models employed today adequately address the influence of water vapor.

Cosmic radiation is the source of the particles which cause water droplet nucleation and cloud formation in the upper atmosphere.  Its flux, in turn, is directly influenced by solar activity and the strength of the resulting solar wind.  None of the climate models deal with either of these first-order climate influences.

The Earth’s atmosphere has had far higher CO2 content many times and for much of the geologic past, and major glacial events have occurred during those times, most notably during the Carboniferous and Silurian.  The inescapable conclusion is that CO2 has no relationship to the temperature of the Earth’s atmosphere.  This is a conclusion that was reached by many scientists who have looked at ice core data and found that increases in CO2in the atmosphere occur several hundred years after temperatures have risen – they do not change in lock-step as has been claimed, and an event 800 years in the future cannot impact events today.

These facts allow a number of fictions to be addressed:

The conclusions to be drawn from examination of these data are four:

1. All of the scary global warming scenarios are based on computer models.

2. None of the models work.

3. There is and has been no scientific consensus.

4. The data which come from our global experiment, the observations we have made, indicate that the climate is evolving and always has evolved continuously, and people have had nothing to do with that change.  We need to use this information to stop our regulators and legislators from taking steps and passing laws which will have no effect on the climate we enjoy and can only have disastrous impacts on our economy.

Dr. W.C. Rusty Riese is a geoscientist based in Houston, Texas.  He is widely experienced having worked in both minerals and petroleum as a geologist, geochemist, and manager during more than 40 years in industry.   He participated in the National Petroleum Council evaluation of natural gas supply and demand for North America which was conducted at the request of the Secretary of Energy; in the more recent analysis of global supply and demand requested by the same agency; and in the National Research Council analysis of coalbed produced waters and their management in the western United States.   He is currently a member of the American Association of Petroleum Geologists Committee on Resource Evaluations, and a member of the House of Delegates, and past Sections Vice President.

Rusty has written extensively and lectured on various topics in economic geology including biogeochemistry, isotope geochemistry, uranium ore deposits, sequence stratigraphy, and coalbed methane petroleum systems; and he holds numerous domestic and international patents.  He has more than thirty years of teaching experience including twenty eight years at Rice University where he developed the curricula in petroleum geology and industry risk and economic evaluation, as well as several other courses.  He is currently an Adjunct Professor at Rice University and the University of New Mexico.  He is a fellow in the Geological Society of America and the Society of Economic Geologists; and a member of the American Association of Petroleum Geologists and several other professional organizations.