It is very hard to read the political rhetoric of Michael Mann, Naomi Oreskes, Bill McKibbens, PBS, CNN, Post, Times (east and west), Tribune, and many other media assets every day: Where, the above-voices have failed to advance democracy in today’s world, by ignoring any of the loyal opposition’s counter-arguments against climate certainty. My only request, please stop treating fiction like it’s news.

Then, there is the whole credibility issue, where respected names like Harvard, PBS, CNN, The Times have lost their intellectual glow, along with signs of objectivity. In particular, Harvard’s name has been associated with the “indirect” EPA Health Study in 2015 and now, this issue of flawed research masquerading as political insight. The only answer is full-disclosure on EPA Panels and climate studies. Steve

A recent report from Harvard researchers accusing ExxonMobil of misleading the public on climate change was based on an incomplete sampling of data collected by Greenpeace, according to a review by Energy In Depth. The Harvard report accused the company of producing research that affirmed human contributions to climate change, and then using newspaper advertorials to deny or sow doubt around climate-related science.

The study’s authors, Geoffrey Supran and Naomi Oreskes, announced the findings of their study in a column in the New York Times, in which they claimed that “81 percent of [ExxonMobil’s] climate change advertorials in one way or another expressed doubt.” The advertorials were taken from a database compiled and maintained by Greenpeace, an anti-fossil fuel group with its own anti-Exxon campaign. Critically, we found that this database omits dozens of climate-related advertorials run by the company that, had they been counted by Oreskes and Supran, would have severely weakened their case.

EID’s own review of the company’s New York Times advertorials reveals a dramatically different picture than what the Harvard authors claim to have found. EID’s random sample of the company’s relevant advertorials shows that the overwhelming majority – greater than 90 percent – affirm or otherwise strongly point to the fact that global warming is happening and humans are contributing to it.

EID’s review further shows that the researchers mischaracterized several advertorials as sowing doubt on climate science, even though the spots themselves described how the company planned to manage risks associated with climate change.

When the study was first released, EID was quick to point out that the two authors of the report, Supran and Oreskes, are key players involved in the #ExxonKnew crusade, a multi-year effort to “delegitimize” and “stigmatize” the oil and gas producer.  In fact, the New York Times cited Oreskes as being one of the original architects of of the #ExxonKnew campaign that started with a meeting at which she was present in La Jolla, Calif., in 2012.

EID also observed that the advertorials cited in the report were predominantly from Mobil before it merged with Exxon in 1999. As a result, the researchers largely compared the climate research of one company with the advertorials of a different company, as Mark Drajem from Bloomberg Government covered last week:

This discovery led EID to do a deeper dive into the report to determine what else the researchers may have overlooked – purposefully, or not.

The Supran/Oreskes study concluded that ExxonMobil’s internal documents and research on climate change, “published from 1977 to 2014, were in line with the scientific thinking of the time.” Where they fault the company is in its communications to the public, which they claim sought to sow doubt about the existence of climate change 80 percent of the time.

But their sample of public documents is small – 36 “advertorials” published in the New York Times between 1989 and 2004. According to Supran, “These are op-ed styled advertisements that the company took out for 29 years, every Thursday in the bottom right corner of the op-ed page of the New York Times.” 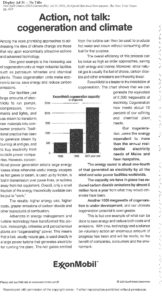 This 2001 ExxonMobil advertorial, not included in the Supran-Oreskes study despite falling within their timeframe and discussing climate change, discusses the company’s efforts to reduce carbon emissions through cogeneration.

But there are a number of problems with this. The first and most obvious: ExxonMobil was formed in late 1999, 10 years after the earliest of the advertorials referenced by the study was published. In fact, of the 36 advertorials rated by Supran and Oreskes, only 11 belonged to ExxonMobil – the other 25 were published by Mobil (a different company from Exxon, remember) before the merger. Remove the Mobil submissions from the mix, and the universe of applicable advertorials is reduced by a 70 percent.

Indeed, study author Geoffrey Supran even misled reporters when he said a 1997 Mobil advertorial, one that strongly questioned the certainty of climate change, was written by Exxon – even though the advertorial prominently features Mobil’s logo and makes no mention of Exxon.

If Mobil and ExxonMobil were publishing these advertorials every Thursday for 15 years, why did the researchers only look at 36 of them? The authors claim that’s the number of advertorials published during the time frame that discuss global warming or climate change. But they didn’t pull these documents by themselves – they relied on a Greenpeace-run website called PolluterWatch to do that for them.

Recall that Greenpeace is currently fighting lawsuits from Resolute Forest Products and Energy Transfer Partners (operator of the Dakota Access Pipeline), which alleges the organization has engaged in “eco-terrorism, racketeering and other crimes.” Greenpeace was forced to admit that it engages in “hyperbole,” “heated rhetoric,” and “non-verifiable statements of subjective opinion.” The Supran/Oreskes study makes no mention of this.

Why would two Harvard historians rely on an incomplete collection of documents compiled by a third-party activist group with a years-long history of attacking ExxonMobil instead of seeking out the documents from the primary source and analyzing them for themselves? It’s unclear, although the researchers’ known biases add an interesting dimension to that question.

Disconnect in the Data

Over the course of a few days, EID found 69 ExxonMobil advertorials published during the time period in question that discuss climate change. We did this with nothing more than a DC public library card. In total, we found 58 more climate-related advertorials run by ExxonMobil than two Harvard researchers found (or claimed to have found) over 13 months of research. EID’s sample was gathered by searching ProQuest for ExxonMobil advertorials published on Thursdays between late 1999, when Exxon and Mobil merged, and April 2010, after which the company appeared to cease publishing regular Thursday advertorials. In total, EID examined 287 advertorials. 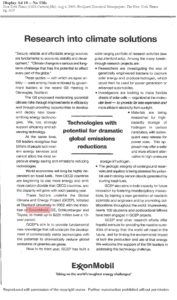 This 2005 ExxonMobil advertorial, missing from the Supran-Oreskes study, discusses the company’s research into climate solutions.

Why did the researchers’ sample of advertorials end in 2004, while their sample of ExxonMobil’s climate research included documents produced as recently as 2014? Because Greenpeace’s PolluterWatch collection, though created in 2015, only includes advertorials that ran through 2004.

In fact, in response to the Harvard study, ExxonMobil provided reporters with two examples of advertorials from the year 2000 as proof that it was not publicly doubting climate change:

“One op-ed titled, Do No Harm, contained the following statement: ‘Enough is known about climate change to recognize it may pose a legitimate long-term risk and that more needs to be learned about it.’ Another, The Promise of Technology, said: ‘Climate change may pose legitimate long-term risks. As one of the world’s leading science and technology organizations, ExxonMobil is confident that technology will reduce the potential risks posed by climate change.’” 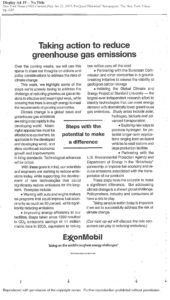 A 2007 advertorial, missing from the Supran-Oreskes study, discusses what ExxonMobil was doing to reduce greenhouse gas emissions.

Supran and Oreskes falsely rated both of those advertorials, the ones ExxonMobil cited in its own defense, as either casting “doubt” on climate change or taking “no position” on it. When questioned about the discrepancy, Supran deflected, saying only that those examples were included in the study without addressing the disconnect between how he scored the documents and what the documents actually said.

Additionally, in a 2001 advertorial, ExxonMobil wrote about “the growing recognition that most governments cannot meet the politically chosen [Kyoto] targets without resorting to economy-wrecking measures.” Supran and Oreskes graded that statement as expressing doubt of man-made global warming, even though it makes no mention of climate change and was establishing a position on a proposed climate policy.Here, the researchers show that they have confused climate denial and opposition to a specific climate policy – in this case one that was voted down 98-0 by the U.S. Senate and opposed by James Hansen, whom Oreskes credits as a leading figure in climate science.

The authors have repeatedly brandished peer-review as a shield against any and all criticisms of their work. But the findings in EID’s review present potentially fatal flaws in the report itself, as it demonstrates how the Harvard researchers omitted evidence and mischaracterized data to tell a particular story.

The researchers did admit that “any analysis of words is subject to interpretation.” But based on EID’s review, it appears that the researchers were unable to escape their clear bias against the company. Based on a more complete accounting of data, the overwhelming trend in ExxonMobil’s advertorials was to acknowledge that climate change is happening, that humans are contributing to it, and that the company was and is taking steps to mitigate it.