Jude Clemente continues to be one of the most balanced writers on natural resources and conservation in the U.S. He has always been worth the effort to read and understand. The “Keep it in the Ground” has always reminded me of a bad idea with no sense of direction.

“Cave woman to cave man: Forget about the low hanging fruit, what about the slow moving animals?”

There is a destructive “keep it in the ground” movement arising from environmental groups to block oil and natural gas development and the pipelines required to transport them. The center of this opposition is in New York and the New England states, where numerous policymakers seek to artificially constrain energy supply. Yet, despite producing none themselves, their reliance on gas electricity has surged. ISO New England now gets about 50% of its power from gas, versus 10% to 15% a decade ago. New York sits in the same boat: gas now generates ~45% of the state’s electricity, doubling its market share since 2005.

It’s no wonder, then, that blocking energy development and pipelines has established home power rates in New England and New York that are at least 50% higher than the national average. Industrial rates are more than double, and encourages companies to leave the area. This is unfortunate and illogical since U.S. natural gas prices have been at historic lows.

There is not enough non-fossil-fuel energy transported to the region to satisfy the needs of businesses and families. For example, Massachusetts has nearly 20 times more gas power capacity than wind and solar capacity combined. Not surprisingly, the “keep it in the ground” movement has no explanation on why those states with the most aggressive renewable energy goals are increasingly using more natural gas. In stark contrast, of course, I’ve already clearly explained it.

Policies intended to reduce oil and gas consumption are dubious: Even if they work in the short term, over time they just lower oil and gas prices and encourage more usage. I’ve already clearly explained it. Oil and gas are so obviously ingrained in the U.S. and global economies, supplying over 60% of all energy. In the real world, this means that more economic growth ultimately means more oil and gas demand. That’s why year after year demand continues to grow. There is no significant substitute for oil whatsoever. And know that natural gas power plants don’t get retired with more wind and solar power, but get built even more because gas is flexible backup required.

The push for disinvestment in oil and gas is dangerous and will surely lead to price spikes down the road because very high and/or rising demand is unstoppable. Too high oil prices, for instance, are about as devastating a thing as there is: 10 out of the last 11 U.S. recessions were associated with oil price spikes. The International Energy Agency warns that today’s cycle of underinvestment in upstream E&P could lead to a price spike, perhaps as soon as 2020. Some $450 billion in oil and gas projects were canceled worldwide from 2014 to 2016 thanks to sunken prices.

In the longer term, our oil and gas supply depends on large-scale, high-cost capital assets, meaning that investment decisions today have long-term implications. Just take the offshore treasure trove that I document, deepwater assets can take a decade to come online. Project delays and/or cancellations lay the foundation for future cycles of market tightness and volatility. Requirements in oil and gas investment grow over time, reflecting ever-growing consumption. For example, in 2011, the International Energy Agency pegged annual global oil supply needs in upstream, transport and refining at $420 billion, but this has now boomed to over $640 billion, with about 75% to 80% in the highly capital-intensive upstream sector.

Global oil demand is expected to increase another ~1.3 million b/d this year, according to the IEA, and soar past 100 million b/d next year, versus 91 million b/d five years ago. That’s a staggering 175 million gallons of oil-based liquid fuels used every hour. One stat illustrates the immense potential: the U.S. has 850 cars for every 1,000 people; China has 75.

This is also why more oil and gas pipelines are so crucial, not just the most economical way to transport energy but also the safest. The Trump administration calls for a bill that gets at least $1.5 trillion for the new infrastructure investment that our country so desperately needs. It’s safe to assume that much of that would include provisions for oil and gas infrastructure. But it’s increasingly obvious that the approval process for pipelines needs expedited, now taking an average of four years for permits to be issued.

Remember: the American Society of Civil Engineers gives us a D+ for Infrastructure, even worse than I did in Mr. Dillon’s trigonometry class. 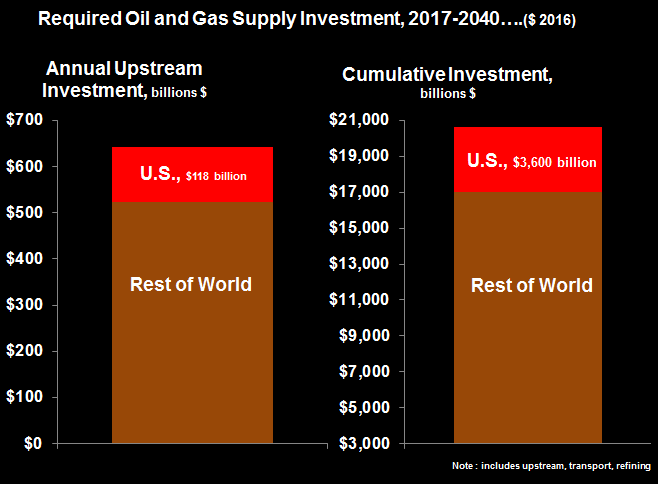 Each year, the U.S. needs to be investing $120 billion to find and produce more oil and gas.